So round one is over and, as promised, here is what we all came up with using our secret ingredients:

My older sisters secret ingredient was broccoli and she made Broccoli Feta Bread!

My secret ingredient was strawberries! I was really excited about this one because strawberries are super versatile. However, my dad (one of the two judges) hates fruits (unlike his wife and children, who love them), so I had to find a recipe with something in it for him. So, making sure I had this week in the bag (or my highly competitive nature wanted to make sure all bases were fully covered), I made like three things. Strawberries Almonds and Cream Sweet Bread, Cheesecake Stuffed Strawberries Dipped in Chocolate and Rolled in Potato Chips (yes I sooo went there), and Lemon Strawberry Shortcake (for dad) with homemade Lemony Whipped Cream.

Unfortunately, I accidentally deleted my Sweet Bread photo’s- but luckily I pulled the recipe from food.com where there are more photos and you can see how to make it yourself- because it was outrageously good! Just add a little almond extract to the batter like I did. Here’s the link! 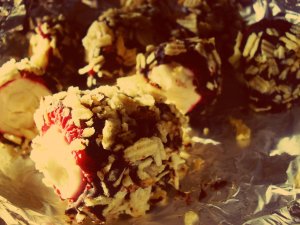 My brothers secret ingredient was chips. Now he’s an avid chip connoisseur, I mean if I was a major chip company (like Lays, Doritos, Fritos, or UTZ) I would hire this kid as my mascot. Luckily for him, his metabolism is faster then lightening. But I digress, he made Cheddar Chip Mac ‘n Cheese – a recipe of his own making! 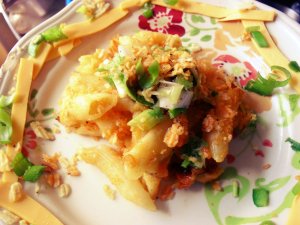 My younger sisters secret ingredient was chicken. Now out of all of us, she’s probably the least cooking inclined. So we were really surprised when she pulled this off- Southwestern Style Chicken Burgers with Cajun Mayo!

So after spending all day working in a hot kitchen. The time to judge had come.While my parents enjoyed everything (as parents do), they let me and my younger sister know that we would be moving on to the next round. Leaving my brother and older sister up for elimination. My older sister ended up being eliminated (you have no idea how funny it sounds to actually write that- it sound so godfatherish), and my brother make it to the next round by the skin of his teeth. Her plate wasn’t as creative as it could have been, and his pasta would have been better had he served it hot and given the cheese enough time to thoroughly melt.

My younger sister and I were both commended for our excellent dishes- and the winner of this round was…ME! Yayyyyy!!! Personally I wouldn’t have minded if my ‘lil sis won because her burger was super flavorful and really really delicious- but, I am happy I won 😉

Did you like anything you saw??? If so, let me know in the comments below and I’ll post the recipe ASAP!